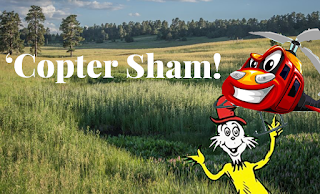 
I do not like this helipad
If near your home, would you you be mad?
Would you like it extra loud?
When wildlife flees, will you be proud?
When farm values, start to sink,
Will you admit you are a fink?

I do not like this ’copter sham
Its owner does not give a damn
I would not like it on my thumb
I do not want it up my bum
I do not like it, not one bit
Go someplace else you stupid twit.

I live very close to Elbert County's newly proposed “helicopter for hire” operation that made it through the September 3rd Elbert County Planning Commission's review.  As you probably have garnered from my terrible mutation of the Green Eggs and Ham passage above,  I really hate this idea.  There are a couple of levels on which this plan is flawed and I intend to make those perfectly clear in this post.  The precedent that this project sets is unconscionable and those of us who fought the Superslab (Look it up!)  in 2005 know the arguments set forth all too well.

Milt Johnson, a neighbor and good friend, made the following observations from the September 3rd ECPC meeting:
“ 9/3/19 Planning commission, 13 Nearby owners voice extreme opposition to finding that use is compatible with the surrounding area and neighborhood and that the use will not cause significant noise pollution, and that the use will not harm the welfare of present or future inhabitants of Elbert County. After hearing about 40 minutes of opposition applicant made statements some of which are paraphrased, and others verbatim.
• You're just being emotional (this is incredibly condescending to effected owners)
• We all hear the horror stories, not true, don't believe it
• Not that noisy, just 85 decibels. It’s a tractor with wings, really it’s a John Deere
• I don't even want the helicopter (honestly, he said it listen for it on the recording)
• Not as dusty as raking a field
• I'm going to plant some trees”

Basically he reduced the heartfelt protests of the people with whom he says he wants to be a friend and neighbor and called them a bunch of whiney NIMBY's (Not In My Back Yards). The ghost of Ray Wells (that pesky Superslab guy) was smiling from someplace in the Underworld as he ticked off these beauties. Boiled down to its purest form, the applicant, Mr. Armstrong, owner/operator of Rampart Helicopter Services, is saying, "I do not care about your concerns.  I am in need of a place to put my commercial helicopter service even if it means turning a quiet agricultural/residential area into a noisy commercial area.  Everybody should love wanting to live next door to an open shooting range, a railroad line, a race track or helipad!  The noise is so enchanting. Just like they did in Douglas County...erm... before they kicked me out."

Armstrong did his homework.  He went out ahead of time and recruited local emergency service providers to act as his ambassadors.  Which brings me to the divisive nature of the arguments he presented at the hearing: Elbert County Citizens love their firefighters, EMT's and Police.  The argument being made is that this is the only place Rampart can go in the county.  That is not true and to be pitted against these valued, brave men and women is totally unfair.  Mr. Armstrong actually will be inconvenienced if, after buying 79 acres of agricultural land and then building what the locals thought was a hay barn, has to move. It would be bothersome but it was his own fault. He hid his true intentions from his new neighbors without asking anybody in the surrounding areas if they had any objections beforehand.  Instead, he went about recruiting our emergency service providers who would never turn down an opportunity to have assistance saving lives and property in the event of a fire.

I get that and you should, too.  But not one person said that Mr. Armstrong should not provide his services to Elbert County.  They did point out that there were areas in the county where the helicopter service would not present such a negative impact.  Nobody said they did not want it.  They clearly said that there were better locations.  Nobody said our county emergency services would not benefit from Rampart. They clearly would.  It was the way in which Mr. Armstrong manipulated the zoning to his advantage at the expense of existing homeowners that really is the problem. His lucrative vision of the future is no more or less important than his neighbors dreams or visions.  The only difference is that their vision was consistent with the neighboring properties.

If you read this and understand that this could happen to you if we set this dangerous precedent, please attend the BOCC meeting on September 11, 2019 in the BOCC chambers of the County Courthouse in Kiowa (2nd floor).  If you can't attend, please consider writing a letter to your county commissioners or giving them a call.  Tell them that you understand that Rampart may need to be placed in the county, just not in an area that will have such a negative impact.

Posted by Robert Thomasson at 9:47 AM