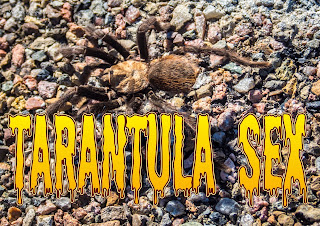 Tarantula Sex
With apologies to George Benson
(Sung to the tune "On Broadway")
They say the women treat you right in Ordway
But looking at them just gives me the blues
'Cause how you gonna make some time
When all you got is one thin dime
And one thin dime won't even shine your shoes
In Ordway
-----------------------------------------
"On Broadway "
Written by Barry Mann and Cynthia Weil in collaboration with the team of
Jerry Leiber and Mike Stoller
Last Thursday I couldn't sleep so I fired up my iPad and found an article that absolutely blew my mind.  It was from the La Junta Tribune-Democrat and was entitled, Tarantulas on the Move This Weekend.  People who know me understand that I have an interest in science, photography, history and politics.  If you count the name of the newspaper, this article covered every one of those bases and I was immediately hooked.  The article outlined the annual migration and "sexcapades" of Colorado's most abundant species of tarantulas.  Yes, Colorado has tarantulas!  Yes, those big hairy spiders. And yes, they are close to where we live!  I must admit, I had never been aware of this annual migration and as a result, I immediately planned a road trip.
The Arkansas River Basin in Southern Colorado is home to literally millions of tarantulas.  The species of which I am referring to is the Oklahoma Brown Tarantula (Aphonopelma hentzi) a.k.a. "The Texas Brown Tarantula, The Missouri Tarantula."  Every year, just about this time, the sexually mature males of this species head out to find themselves a mate.  Love is in the air and spiders are on the move in places and towns with swell names like Swink, La Junta, Ordway, Kim, Timpas, Rocky Ford and Fowler.  No place is as swank as a place like Swink to a Brown Tarantula.

I need to back up for a moment.  You may have found yourself wondering just how spiders tell the locals that they are about to celebrate this annual event.  After all, this is the only time of year when all of these gallant males of a certain age and drive are going to go out in public and they want people to be aware of their presence, right?  Wrong.  They don't care about a damned thing except for those comely lasses hiding in their underground dirt hidey-holes playing hard-to-get.
However, It is not the spiders that are the harbingers of arachnosexcapades at all. It is, in fact, the giant wasps known as Tarantula Hawks (Pompilidae, Pepsis sp.). 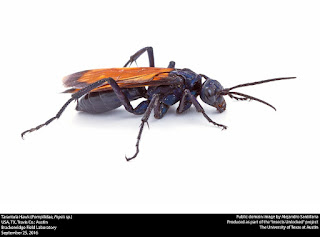 These beauties are the ones that definitely have the most interest in tarantula migrations.  When the Tarantula Hawks start hanging around, the people who are attune to such occurrences call the local newspapers because they know that the short migration of Oklahoma Brown Tarantulas has begun.  You see, the Tarantula Hawks need tarantulas for laying their eggs.  If a Tarantula Hawk stings you and you happen to be a tarantula, you are in for an excruciating death.  When the Tarantula Hawk strikes, her venom paralyzes the spider.  Then this wasp proceeds to lay her eggs. Unfortunately, the venom does not immediately kill the tarantula;  the slow agonizing death comes from the larvae leisurely eating the paralyzed, very alive spider right there on the spot.
In a bit of irony, the venom from an Oklahoma Brown Tarantula is no more dangerous to humans than the sting from your average honey bee. In fact, some experts say they have no venom whatsoever. The Tarantula Hawk, on the other hand, has one of the most vicious stings in terms of pain that a human being can endure.

'The sting of the Hawkwasp is likened to being electrocuted, or having your blood replaced by fire.'

People are pretty casual about dispatching a single wasp. Without too much fear they are quick to grab a flyswatter to kill any irritating flying critter.  I am reminded of my father who was deathly afraid of snakes.  Once as a child, I caught a small harmless garden snake and wanted to keep it as a pet. My dad nixed that plan even though I assured him it would not harm him.  He very carefully explained to me that it is not the snake that would kill you;  it is running into a low pipe while trying to flee what you are afraid of that will kill you. Wisdom I think we should all consider.
That is the way it is with Oklahoma Brown Tarantulas.  They really are quite harmless, but if you jump into the path of an oncoming bus to avoid one, you are a goner.  However, if  that Tarantula Hawk stings you, it will be excruciating and something you will never forget. Few people know about the Tarantula Hawk sting but they become experts once it tags them.  Just something to keep in mind...
My wife and I headed out early and were in the Arkansas River Basin within a few hours.  I decided to take the matter of how to find the tarantulas by the horns...ask the locals.  We pulled into a few convenience stores and I would casually wander up to the counter and ask, "Do you know where the spiders are, erm... you know, migrating to have sex?"  With almost no exception, people were quick to point out that while they knew the Basin was a hotbed for the big hairy spiders, nobody seemed to realize that the migration was in progress or where one would find some wild, risqué spider action. I think a couple of people thought I was pulling their legs. One woman seemed flattered that I thought she looked like a person who might be in command of such information. I was getting nowhere fast. I knew that if this were going to be a successful expedition then I was going to have to be smarter about my exploratory methods.

My next move proved to be a lot more productive. While in line at a convenience store, I tried talking only to those who looked like people who were interested in spiders. (I personally know two people who are really into spiders. Both are attractive, highly intelligent, fun-loving people and both females. However, neither of them were with us to help with our spider quest.) Nobody seemed to be on top of the subject until one man approached me in line.  He said, “I noticed you were talking to all of the attractive, highly intelligent, fun-loving women in line here about spider sex.” He followed up with, “ While I am not female or particularly attractive, I did read an article in the local paper last Friday.  Find that paper and you will find the information for which you seek.”  He then vanished in a puff of smoke.  Did I mention he was smoking a cigar?
I told Gaye about the incident and she immediately looked up the article online that I referenced above.  It was a very informative piece that gave actual details on where sightings might in fact be possible.  Eureka! We had an actual lead.
We headed out toward Kim, CO from La Junta to look in the recommended areas and drove for what seemed to be an eternity.  While I cannot be certain of this, I believe that temperature is crucial to the art of tarantula spotting. As the afternoon got a little warmer, those determined, hairy boys started heading out onto the roads. And one by one, they started their journey across the asphalt.  It was awesome. 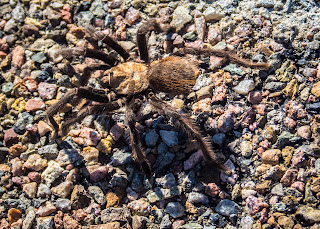 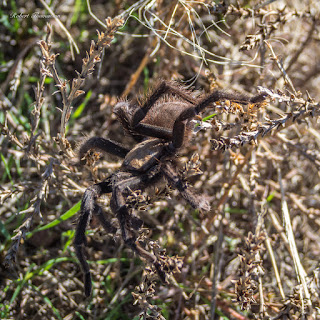 I must digress for a moment to mention that the likelihood of you seeing a tarantula from a speeding car is greatly enhanced when they actually step out on to the pavement. Despite their large size, (up to five inches in diameter), they are virtually impossible to see in the grasses and weeds on the soft shoulders. They are camouflage geniuses.
And, I contend that all of the jokes you have heard for your entire life about why the chicken crossed the road actually originated with big hairy spiders. Why did the chicken cross the road?  Well, it was a damned chicken, and if you know chickens, you are probably aware that they are both flighty and a tad scatter-brained.  They might not even give you the same answer twice in a week about their motives regarding getting from one side of the street to the other.
Compare that to the answer you might get from an Oklahoma Brown Tarantula if you asked him why he was crossing the road.  The sturdy spider will, without hesitation, tell you that he was crossing the road to get laid.  We tend to be a bit puritanical here in the USA, so it is just easier to make fun of chickens than it is to answer questions about sex.  I am sure that made sense to someone reading this, but as I said a few paragraphs back in this article, “I digress.”

Both the male and female of the Oklahoma Brown Tarantula species molt every year to allow for growth.  Until he becomes sexually mature, the male is slower, chubbier, less attractive and certainly less buff than when he finishes his final molt.  That final molt is like a super makeover.  He is leaner, faster and so much better equipped to meet the ladies.  If I am not mistaken, he even develops tibial hooks on his legs to keep his amorous, yet bite-happy partner from nipping the crap out of him with her ample fangs as they go about the process of making wee baby spiders. He is often successful dodging her "love bites"  and if he is, he just may live long enough to find a few more partners before he dies.  Yep, this is a once in a lifetime migration for him. He is gonna die.   Period.   Done.  Last hurrah. 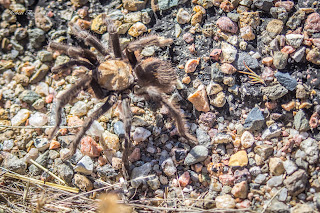 Those female Oklahoma Browns, on the other hand, may have many partners over the course of their lifetimes. These lovely creatures can live up to 30 years in the wild.  Go figure.  Where is the justice?

It was a fascinating day, and I know enough now to look for the event each Fall, and I definitely will. The spiders are actually pretty easy to photograph and even though they are not particularly enamored by the attention, they really just want to get about their business. I am certain that kids would just go wild at the opportunity to meet spiders this large in the wild.  Of course, they should not be picked up or taken home to become "pets."  Remember, the spider that you pick up is more than likely to be a sexually mature male and, sadly for him, at the end of his life cycle. He needs to spend the remainder of his time here left on Earth doing his spider business. His destiny.
Look for an article next year, around this time in October, from me. Perhaps a tour bus with scores of tarantula sex enthusiasts can be arranged. Okay, not every idea is a good idea. 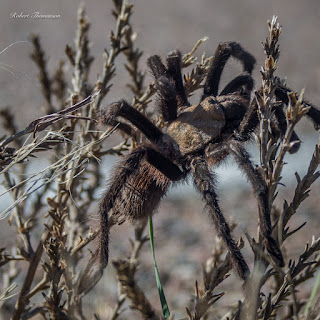 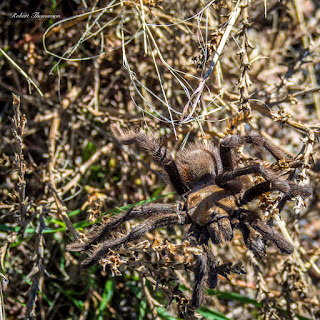 Posted by Robert Thomasson at 11:36 AM No comments: