Welcome to the inaugural post of my blog, Mundus Vult Decipi, Ergo Decipiatur.  The blog title is a Latin phrase that has become very pertinent to me.  Loosely translated it means “The world wishes to be deceived, therefore let it be deceived.”  After nineteen years of living in Elbert County and exercising what I understand to be my civic duty, I have become convinced that this simple phrase defines precisely the way the leadership in my beloved home county of Elbert operates.  It is not so much a criticism of the county as it is an observation that I feel compelled to explore and to try and understand.  You may not always agree with my observations, but I invite you check out my facts and challenge my conclusions.  I welcome your comments as long as they are on topic and not pointless ad hominem attacks. 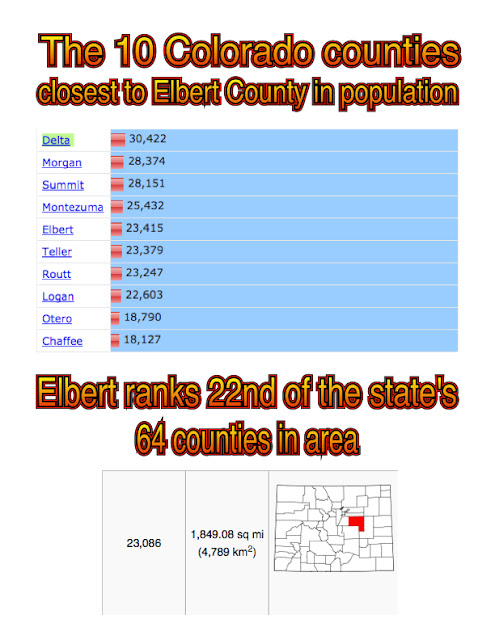 I begin this journey with a simple comparison of Colorado counties.  There are sixty-four counties in the state. For purposes of brevity, I selected ten counties that are most closely related in population to Elbert County.  The chart that I provided shows Delta County as the most highly populated of the ten with 30,422 residents. Elbert County comes in fifth with 23,415 residents.  Rounding out the field in the number ten spot is Chaffee County with a population of 18,327 residents.  These figures act as a pretty good indicator of what rural Colorado looks like.  The combined population of the ten counties is about 225,000 people in an area of approximately 13,990 sq. mi.  To further illustrate, that is a population that is slightly smaller than that of Douglas County to our west and living in an area just a bit larger than the state of Maryland.

Elbert County ranks third in these ten counties in terms of median household income.  The median household income in our county is listed as $68,813.  That is actually pretty good.  That ranks us above the median family incomes in Weld, Denver, Adams and Pueblo counties.  We are not generally viewed as a poverty stricken county by any stretch of the imagination.  These numbers do provide us with a bit of a conundrum.  Why is it that despite our seemingly healthy financial position, do we lag behind the other counties on our list in a couple of key areas?

Of the ten counties on my list of comparable counties we are the only one that has government offices open only four days per week.  For those of you who are new to the county or have not been paying attention, our county offices are only open Monday through Thursday.  Put in more succinct terms, we pay our taxes the same way our fellow counties do, yet we have 20% less access to services in terms of days we can actually utilize them.  This cutback was initially a money saving move taken by our BOCC. It came at a period of time when our county was thrust into a budgetary crisis due to debt related problems surrounding the rebuilding of our Justice Center.  While I regularly hear from our elected leaders that we are pulling out of our money problems, I hear almost no discussion on bringing the five day work week back.  Despite claims that this is some sort “smaller government” that we should embrace, I do not see anything smaller about it.  We pay a lot in taxes, yet we get less in terms of actual access to services.  I believe that is not only deceptive, but unfair.

Of the ten counties that are on my list, we are the only one that does not have a landfill for trash services.  I called the nine counties on the list that have a public landfill. Without exception, every county reported that they were happy with their landfill operations. Each county reported that their landfills were paying their own way with fair fee schedules and that the public seemed very grateful for the service.  We in Elbert County were told that our trash compactor operated at a loss and we closed it a number of years ago.  Of course it turned out in retrospect that the trash compactor actually did pay its own way, but due to bookkeeping practices that have never been fully explained, their budget became responsible for salaries unrelated to sanitation services.  We still own the the Titan Missile Silos site where we could operate a trash compactor or small landfill, but we are told that because we have trash companies in the county, there is no need for other or additional services.  We get the luxury of hauling our trash to Denver or Colorado Springs.  This may work for some of us living in a rural agricultural setting who have a truck and trailer, but many do not.  This often results in the age old practice of dumping trash in draws or even dumping trash on sparsely populated county roads.  I have seen it first hand, but every time it comes up to the BOCC, the answer is that it is not a problem worth solving.

What do you think?  Are the facts that I presented irrelevant?  Are these points just carping or do they have some merit?  You will notice that not once have I called out a political party.  I do not give a whit as to which party you belong. When you pay taxes, you have the right to ask why our county lags behind other similarly populated counties.  These other counties in many cases have an identical political makeup as Elbert County with smaller median incomes, yet they have services five days a week and a place to take their refuse. is this a case of mundus vult decipi, ergo decipiatur?
Posted by Robert Thomasson at 7:27 PM No comments: