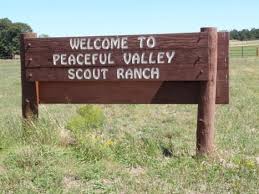 Today at 1:00 in the BOCC Hearing Room, the Peaceful Valley Boy Scout Ranch made its presentation to get a zoning change from Agricultural status to a PUD (Planned Unit Development), and it was unanimously approved by the Board.  In my blog yesterday I had pointed out that it was my fervent hope that all my questions in regards to this matter would prove to be groundless and that I could gain reassurance that the enormous BSA Ranch (Boy Scouts of America), my western neighbor, was not up to anything suspicious due to the fact that its parent organization has fallen on hard times in recent years.

The presentation was made.  It was thorough and the public was asked to make comments.  That was why I was there.  I had three minutes to make my points and ask my questions.  I spent my three minutes asking the questions at the top of my list and making a few observations, but I was unable to get to them all.  That is the way it works in a hearing. I went first and was relatively sure that others in the crowd would ask the questions I did not get to ask. My focus was on valuable water reserves and to point out that even though I was an ardent fan of the BSA, I viewed this recent downturn for the Scouts a potentially problematic situation.  Since the BSA was in trouble, this vast land was an asset that understandably could help them resolve financial issues if it were sold.  Since it is in Elbert County, there is a genuine thirst for their water reserves by neighboring communities.

I also took the time to point out that recent unrest toward the county government regarding what the citizenry viewed as unbridled development was in part fueling this present concern.  I pointed out that letters to the adjacent neighbors were vague and the county provided little information to those searching the topic online or over the phone.

In Elbert County, water issues always take center stage. As much as I admire the BSA, selling water rights or changes usages on the property was something I believed the public had to know about. This concern was adamantly addressed by the representatives from the BSR. No plans to sell the water or water rights.  They need the water that is there to be a successful organization.

Another one of my neighbors stood up and delivered her message to both the Board and to the assembled committee of officials from the BSA.  That was it.  There were no more questions from the public.  The Commissioners asked some pertinent questions designed to assuage the frazzled nerves of an audience that, in hindsight, seemed placid following the formal presentation.

This meeting was a first for me in that the BOCC members actually brought up more points than did the audience in attendance.  Then the BSA answered even more questions and validated that yes, the Scouts, on a national level, had fallen on hard times, had sold numerous facilities and even water rights due to recent enrollment decline and lawsuits.  But they were also careful to point out that the Denver Area Council was not in the same financial lineage of some of those more notorious branches, and that, in fact, were making $18 million dollars worth of improvements.  They pointed out also that the agricultural contract with the Olkjer family and the partnership that they have with the BSA are viable and keeping the camp in good financial shape.

This is all good news.  This was what I wanted to hear.  I walked away feeling that I had done my civic duty.  Despite some criticisms online in a couple of venues and one person in the meeting who seemed to believe this was all about fear mongering, the meeting was informative and non-confrontational.  I followed up with the members of the BSA contingency and they were even kind enough to offer my wife and I a tour.

I feel more at ease, but lest you think I have now become a fanboy of current development policies in the county, rest assured I have not. The point is that when you have questions that you feel are legitimate or not, it is your right to participate.  Do not let others dissuade you from getting the answers you want or need. Stand up and be heard.

If something changes in regards to the PUD, the public was assured that the BSR would have to resubmit their application.  It is our responsibility as citizens to watch for changes like the ones proposed in today's BOCC meeting.  If it does, and it is posted, I will be right back there asking questions.


Posted by Robert Thomasson at 3:46 PM