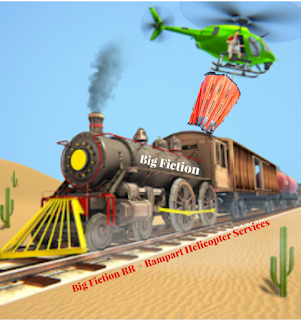 This following is a true story. Some years ago, a close friend of mine and I filed incorporation papers with the Colorado Secretary of State and that was the humble beginnings of The Big Fiction Railroad Company. We used the boilerplate language set forth by none other than the father of the Superslab, Ray Wells.  We used the same antiquated and unfair language that allowed Mr. Wells to claim that he could build a toll road from Wellington, Colorado to Pueblo Colorado.  It was a swath of land that was 12 miles wide and 210 miles long and had literally thousand of farms and homes within its boundaries that would likely be subject to eminent domain laws straight out of the 1800's.  Encumbrances were placed on the titles of all the properties in the pathway of this gigantic railroad scam.  It took years to fully drive a stake in the heart of this ill conceived plan.

To make a point with the Colorado legislators, we used our railroad company to lay claim to a similar corridor that ran from the Cherry Creek Mall, through the Denver Country Club, up Broadway Blvd, through downtown Denver and arriving at Coors Field.  Our reasoning was no more outrageous than that shown by Mr. Wells.  When you want to get to the ballpark, why not take the train?  Our plan was read into the hearing records on the Superslab at the Colorado State Capital. Lots of lawmakers laughed, but it was derived from the same laws and flawed reasoning, and they had to agree it was a legitimate claim. Once we made our point, my friend and I put away our engineer caps and dissolved Big Fiction Railroad. We had successfully made our point.

Here we are in 2019.  The Elbert County BOCC is about to decide on the fate of Rampart Helicopter Services, to be located approximately 2 miles to the south of County Rd. 94 on the east side of County Rd. 37, on September 11th.  We are going to look at the laws and and zoning regulations and see if this is a fit for a quiet, agricultural/residential (A/R) neighborhood whose residents want nothing to do with this plan.

The whole point of this post is that those of us who live here are going to face the fact that even though this is not a fit, the BOCC may make it a reality.  Can they do it? Yes, just as certainly as our Colorado State Government could have done it  with Ray Wells  over a decade ago. Before the contingency from the Eastern Plains arrived at the Capitol, the legislators were pretty much sold on the SuperSlab bill of goods.  But the precedent, as we pointed out with the Big Fiction Railroad, would have been far reaching and ill advised.  The people spoke.  Our representatives in government heard us.

If we let this type of decision go forward now, anybody can have their own helipad almost anywhere in a county, our county, which has as much land area as a small New England State.  Don't think it can happen to you to your neighborhood?  Well, when I moved here twenty-two years ago, I did not think a railroad could be built across my land let alone a commercial helicopter landing site be located just a stone’s throw away,  but both were planned and proposed and made it into the legislative process.

Think about it.  Would you want this in your backyard?  Most will answer with a resounding, “HELL, NO!"  Some may have no objection because the business does valuable work that I myself appreciate.  I understand that reasoning.  But once the genie climbs out of the bottle, it sets a precedent and it is hard to go back.

If this resonates with you, show up and go to the microphone.  Be prepared with a written statement.  If you have documentation to share, make four copies: one for each of the commissioners, and one for their clerk.   Make your three minutes count.

I will be there, not to say that Rampart Services does not belong in Elbert County because it could be an asset, but it needs to be located in a place where zoning and existing homes and agricultural businesses will not be so adversely impacted.  Be there and let your voice be heard as well. Be proactive and vigilant. Now. Our Elbert County property rights need to be protected.

Posted by Robert Thomasson at 11:09 AM